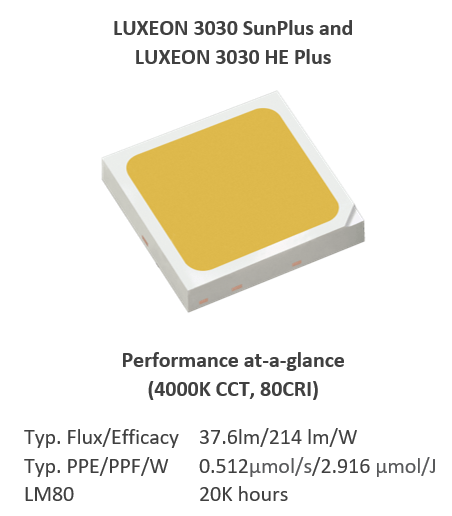 San Jose, CA – April 26, 2022 – Lumileds today announced a new, higher performance level comprised of 21 new parts for its horticulture and illumination mid-power 3030 LEDs. Typical flux, PPF, and efficacy have increased 2%. In a luminaire comprised of hundreds of LEDs this is important and implemented throughout a greenhouse or in a vertical farm, for example, it can have a tremendously positive impact on cost and energy use. The new parts have CCTs of 2200K to 6500K and CRIs of 70, 80, and 90. LUXEON SunPlus 3030i is specified for PPF and PPE for horticulture while the LUXEON 3030 HE Plus is specified in flux and efficacy for illumination.

Both 3030 white LED portfolios are engineered for robustness and consistency and easily outperform competitors in tests for Wet High Temperature Operating Life (WHTOL) and Hydrogen Sulfide (H2S). LUXEON 3030 LEDs pass 85°/85% Relative Humidity testing at 30minutes on / 30minutes off at 480mA for 1000 hours. Lumileds follows the JIS C 60068-2-43 test condition for H2S testing and LUXEON 3030 LEDs perform exceptionally well under these conditions at 15ppm H2S, 40°C, Relative Humidity of 80%. Further testing shows color shift, measured as DuV, to be less than half of competitors.

“While industry datasheets can be good for showing perfect world performance, our LEDs need to perform in tunnels, along roadways, in greenhouses, and in vertical farms. These are harsh, wet and humid environments,” said Tiger Xue, product manager at Lumileds. “LUXEON SunPlus 3030 and LUXEON 3030 HE Plus are designed to perform at the highest levels for tens to hundreds of thousands of hours not on paper, but in real-world environments. And with the increased performance, narrowest Vf range and tightest color consistency, they deliver exceptional value.”

LUXEON SunPlus 3030 and LUXEON 3030 HE Plus are immediately available through Lumileds’ distribution network and are part of the Zero Worry Lead Time program from Future Lighting Solutions.

i Previously known as LUXEON 3030 Horticulture